EMERGENCY ALERT NO Fire Ban in Effect Read On...

Bucks rub their antlers on small, flexible trees in order to rub off the velvet that initially covers them. During rut, bucks rub their antlers on trees to attract receptive does and to demarcate territory and warn other bucks to stay away. Unfortunately, buck territory nowadays includes many people's landscaped yards and prized trees. It is possible that the buck may return to rub on this tree again if it is part of his territory.

It is amazing how much buck rub damage trees can survive. Damage that completely encircles the tree's circumference is more deadly than damage up-and-down. This is because the tree's vascular system is just under the bark. Young trees have very thin bark that offers no protection from such damage. The bright green layer under the bark is called the cambium. It is only one cell thick, and it gives rise to the tree's vascular system. 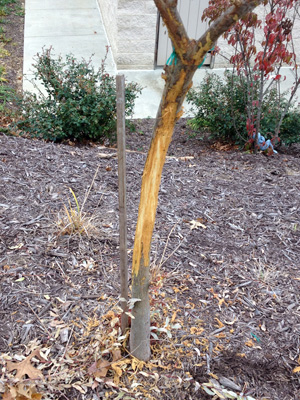 Xylem & Phloem Xylem (ZI-lem) -- the part of the vascular system that transports water and nutrients from the roots throughout the crown of the tree -- is produced to the inside. Phloem (FLO-em) -- the part of the vascular system that transports the products of photosynthesis to the roots -- is produced to the outside, just under the bark. When a tree is damaged completely around its circumference, it is said to be girdled. Trees that are girdled often die because they can no longer transport water and nutrients. If the damage is most severe up-and-down on the trunk, the tree can survive, although it may die on the side where the damage occurred.

Trees are capable of healing a surprising amount of damage on their own. Avoid the temptation to use a wound dressing. It may make you feel better -- like putting a Band-Aid on the wound -- but it can actually interfere with the tree's ability to heal itself. The burlap strips are not going to help, either, although they are less likely to cause problems than would dressing.

Tree Vandalism Repairs The best practice is to use a sharp knife (a grafting knife comes in handy here) to cut off jagged pieces of bark around the edge of the wound. If you can cut the wounds into an elliptical or football shape, it will help the tree recover more quickly, but do not dramatically enlarge a wound to accomplish this. Just clean up the edges as best as you can because they will heal easier than the ragged damage left by Bambi's antlers.
Prevention Since the buck may return to rub again, the burlap strips are not going to be enough to protect the tree from further harm. You should surround the tree with a sturdy fence or barrier that can keep a determined deer away from the tree trunk. A 6-foot-tall barrier of welded wire mesh, supported by 8-foot-tall rebar pounded into the ground at regular intervals around the circumference is a reliable way to keep bucks from rubbing on young trees. While deer repellents can help prevent deer browsing, they are not very effective in controlling buck rubs. 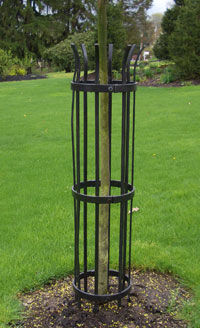