EMERGENCY ALERT NO Fire Ban in Effect Read On...

Appearance and Life Cycle Control
The cooley spruce gall adelgid has a very complex life cycle which is not fully understood. Adelgids are a small group of insects that are closely related to aphids. The normal life cycle of this adelgid consists of 6 different forms of the insect over a 2-year period on 2 hosts; spruce and Douglas fir. In Saskatchewan and Manitoba where there is no native Douglas fir, the adelgid has the capability of completing its life cycle entirely on spruce. Only the first form of adelgid causes a formation of galls, whereas, the remaining forms feed openly on needles. Another form of the cooley spruce gall adelgids produce white, cottony protective covers for their eggs. These cottony covers appear as white specks early in the spring and continue throughout the summer, and can cover an entire tree during a severe infestation. 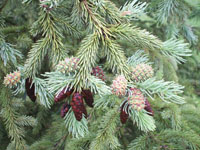 Damage
Damage first occurs in late May when the new growth of the branch tips form into cone-shaped galls. Galls vary in length from 25 to 75 mm and 12 to 18 mm in diameter. The galls are green at first but later turn a reddish-purple color. The old galls dry out and turn a reddish-brown color and may remain on the branches for several years. During a heavy infestation, young spruce may be severely deformed because the buds die on the gall-infested twigs. On established spruce, the growth and vigor may be reduced but trees are rarely killed.

Control
Some control may be achieved by picking the new galls off as they form and burning them. This will improve the tree's appearance and reduce the aphid population. Chemical control of the cooley spruce gall adelgid can be achieved by applying carbaryl or malathion in early spring just as the buds begin to open.
Stay
Informed
Online
services
Interactive
Map
Employment
Agendas &
minutes
Contact Us
Government Websites by CivicPlus®
[]