The sequoia pitch moth, Synanthedon sequoiae, occurs from California north through British Columbia. This clearwing moth (family Sesiidae) infests Douglas-fir and most pine species, especially Monterey pine in urban coastal areas of Northern California, from Monterey Bay to the San Francisco Bay Area. The Douglas-fir pitch moth, Synanthedon novaroensis, infests Douglas-fir, pines, and spruces from Northern California to Alaska. Its appearance and biology is similar to that of the sequoia pitch moth.

Damage
Pitch moth larval feeding causes infested conifers to produce copious amounts of resin that form globular masses on bark. Larvae cause very little injury to cambium or wood; this damage usually does not cause girdling of the trunk and rarely kills trees. Larval feeding sometimes causes one or more limbs to die or break, especially if infested trees are young. Sequoia pitch moth is the more common of these Synanthedon spp. and is usually the only one that is managed. It frequently attacks pines with pruning wounds or other injuries, and its damage is most prevalent in planted Monterey pine (Table 1). 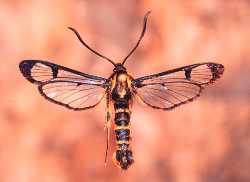 Identification Infestations are recognizable by the gray, pink, reddish, or yellowish pitch masses that protrude from infested trunks and limbs. Pitch masses initially are small, soft, glistening, and reddish brown to pink. As the larva feeds and grows beneath each mass, the gummy exudate enlarges, hardens, and becomes darker gray. A brownish pupal case may protrude from the mass after the larva has matured and emerged as an adult. Old pitch masses can remain on bark for several years. Abandoned pitch masses are often reinfested because egg-laying females are attracted to these injury sites. People unfamiliar with the damage sometimes confuse pitch moth pitch masses with bark beetle pitch tubes. Bark beetle pitch tubes are usually less than 1/2 inch in diameter, often have a distinct round hole near the center made by an adult beetle, and may resemble the end of a large gummy drinking straw protruding from bark. Sequoia pitch moth masses ultimately become much larger, vary in shape from roundish to an elongated oval, and often lack a distinct emergence hole. Resinous ooze from pine bark can have other causes, including Diplodia canker, western gall rust, injuries such as pruning wounds, and pitch canker, caused by the fungus Fusarium circinatum. Unlike the distinct pitch protrusions of bark beetles and pitch moths, if injuries or pathogenic fungi are the cause, bark usually becomes coated with a thin layer of resin resembling thick syrup. In addition, bark discolors due to pitch canker, while bark around beetle and pitch moth attacks is not discolored. Pitch canker can infect pine tissue of any age, including young branches and terminal shoots the diameter of a pencil; bark beetles and sequoia pitch moth attack primarily the main trunk, although they sometimes attack large limbs several inches in diameter. Unlike the natural shed of older (inner branch) needles throughout the tree during late summer and fall, pitch canker can cause dying, yellow and red needles to appear at any time of year. Pitch canker causes dead branches scattered throughout the tree, and it can eventually kill the entire pine tree. When bark beetle feeding causes foliage color to fade to yellowish green, then to tan and red-brown, this tree decline and dieback typically appears first only at the tree top (due to Ips beetles). Sometimes the entire tree fades and dies (from Dendroctonus species and others) without being preceded by scattered branch dieback. However, these symptoms of tree decline and death can also be due to other causes. For more information, see Pest Notes: Bark Beetles and Pitch Canker, and Pests of the Native California Conifers. Pitch moth adults are day-flying moths, distinguished from other moths by their mostly clear wings with blackish margins. The Sequoia pitch moth’s head, legs, and thorax are blackish and yellow. The abdomen is covered with blackish and yellow hairs in alternating bands, resembling a paper wasp or yellowjacket wasp. Females are somewhat larger and plumper than males. The adult’s body is about 3/4 inch long with a wingspan of 3/4 to 1 1/4 inches. Although the colors and erratic flight behavior of adults resemble those of paper wasps, clearwing moths (including pitch moths) are not wasps: they do not sting and are harmless to people and pets. The adult Douglas-fir pitch moth is orange and black, instead of yellow and blackish as with sequoia pitch moth. Douglas-fir pitch moth biology, life history, and management methods are similar to those of sequoia pitch moth, but Douglas-fir pitch moth usually is not managed in landscapes. Life Cycle Most pitch moth individuals require two years to develop from egg to adult. Because not all pitch moths emerge from pupae at the same time, adults can be present anytime from May through early September. Adults emerge earlier at warmer inland sites and later at cooler sites near the coast. Peak emergence occurs in June and July. Adults live only a few days, during which they mate, and females lay eggs individually on bark, usually in crevices around pruning wounds and other injury sites. Eggs are 1/16 inch in diameter, reddish brown, oval, and somewhat flattened. They hatch in about two weeks. The insect spends most of its life in the larval stage. The dirty white, grayish, or pink larva feeds for months, excavating a shallow cavity that penetrates the inner bark to the cambium surface of wood. After feeding as a larva, the pitch moth develops into dark brown pupa that is about 3/4 inch long. The pupa sits in a chamber within the pitch mass for about a month, then moves to the surface just before the adult emerges. After the adult has emerged, the brown, thin-walled pupal case remains protruding from the surface of the pitch mass, or drops and lands in a bark crevice or on the ground.
Stay
Informed
Online
services
Interactive
Map
Employment
Agendas &
minutes
Contact Us
Government Websites by CivicPlus®
[]